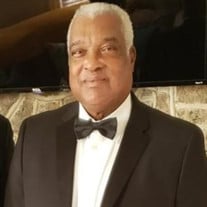 Dr. Arthur Howard, PhD., Obituary There is a beautiful new saxophonist playing heavenly psalms in the presence of the Lord today. Dr. Arthur Howard, PhD., a devoted evangelist within the Hemet valley community, has for several years played edifying, comforting, and exhorting Christian hymns with his saxophone to minister to the homeless and the lost in the Hemet parks. Arthur led many souls to Christ with his evangelism, as park patrons would approach him and thank him for ministering to their souls with his music. He not only witnessed the gospel of the Lord, Jesus Christ, to hungry souls, but also fed their hungry stomachs through his ministry, Compassion Ministries. Arthur Howard was born, May 30, 1944 in Fort Worth, Texas, to the late Frederick Howard and Elizabeth Fields. The family eventually moved to California and Arthur graduated from San Jose High School in 1962. Education was very important to him, and he went on to earn his Associate of Arts degree from San Jose City College; a Bachelor of Arts degree from Columbia College Hollywood, in television production, magna cum-laude. He also achieved a Master of Arts degree and a doctorate degree from the University of LaVerne, in Communications. As an entrepreneur, Arthur made news headlines as being one of the original design team members of Northrop Grumman’s 747 aircraft back in the 1960s. Arthur went on to become an executive in the aerospace industry. Although he grew up poor, he always provided the best for his family, and he often worked a second job at night and on weekends he sold merchandise at the flea market. An avid music lover, Arthur was also a popular Bay Area DJ, and eventually became a real estate investor. Of all his networking and contacts achieved, it was his eventual meeting with the Lord, Jesus Christ, 35 years ago, that profoundly changed his life, and by his example, he led his entire family to Christ. As the story goes, Arthur came home one day a different person, with a heavenly glow. He gathered his wife and 2 children together and said: “I met Jesus Christ today, and I want to invite you all to meet him too. Will you come to church with me next Sunday to meet Jesus?” The whole family spontaneously agreed, and thus began Arthur Howard’s spiritual career as an evangelist, which began with his family, and blossomed to his evangelism in the Hemet valley parks. Arthur was a friend to everyone, even when he faced adversity while evangelizing, he always prayed for his enemies and received God’s faithful protection. His life touched many people. Arthur leaves behind to cherish his memory a loving and devoted son and daughter: Eric J. Howard of Indio, California; and Kimberly Howard-Johnson, and a son-in-law, Craig Johnson, of Richmond, Virginia. He leaves his sister, Joyce Howard-Clary, of Farmersville, California; two nephews and three nieces. He leaves his church family at New Life Open Bible Church, headed by Pastor Keith Garrett and his wife Mrs. Franchiska Garrett, and many, many wonderful friends around the country, including his devoted friend, Ms. Mary Heard, of Hemet, CA. Surely goodness and mercy shall follow me all the days of my life: and I shall dwell in the house of the Lord forever. (Psalm 23:6)

The family of Dr. Arthur Howard PhD. created this Life Tributes page to make it easy to share your memories.

There is a beautiful new saxophonist...

Send flowers to the Howard family.