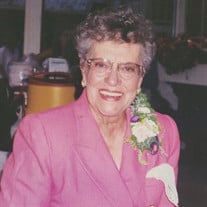 In celebration of the life of Betty Lou Brown Martin Betty was born on January 2, 1930 to Elsie and Roy Frank Brown, in Hemet, California. Betty was a musically gifted, loving and humorous mother, wife and friend. In her youth, she attended local Hemet schools and later in life she returned to Hemet High School where she served as a Campus Supervisor. In that capacity, she was loved and respected by many, but not so much for some of the rowdy troublemakers. Betty met Major Joseph Martin while he was stationed at March Air Force Base, and married in 1954 in Tucson, Arizona where he had been transferred. As was typical for an officer’s wife, Betty followed Joe’s career to many parts of the country. Along the way they added to their family in Tucson, Florida and New York. In 1960, Betty and Joe, along with four girls, moved back to Hemet from New York. On one return trip to the east coast to visit family, Betty often recalled an epic road trip in 1964 when her and Joe loaded up the four girls, Susan, Sharon, Jo Ann and Arlene in their bright yellow, big finned Cadillac Coup de Ville for the trip from Hemet to New Jersey. The fact that Betty survived that journey speaks to her patience and love of family. Betty was involved in the town she loved. She was an accomplished singer, where as a vocal student of Robert D. Price and a member of the Riverside Community Players, she refined her craft and shared her talents with many local community service groups and churches. She was responsible for forming the folk Mass for Our Lady of the Valley Catholic Church. Her singing was a popular request for many local wedding services and she even sang at the opening of the Mount San Jacinto College Library. In addition to her vocal talents, Betty served in a major role in making the head dresses for the Headdress Ball in Gilman Hot Springs. The Ball raised money for children in need of assistance in clothing and dental care. The success of that ball continues in other parts of the State. Betty also enjoyed some culinary skills. One notable standout was her famous apple pie which was oven baked in a paper bag. It was not only enjoyed by her family, but it also won a Blue Ribbon at the Farmers Fair in Hemet. Another, while not so much a favorite to consume, was the annual Christmas fruit cake. The project was a family affair, and everyone had their job in creating the Christmas staple. Family get togethers were an important part of Betty’s life. Whether at a cabin in Idyllwild or a home on Laguna Beach, Betty took those special opportunities to unite her growing extended family and to teach everyone the fine art of playing Spades and feeding the visiting raccoons. In addition to her love of family was her love for the LA Lakers. She often retreated to the comfort of her bedroom to listen to the game. Upon the passing of Joe, Betty did not slow down a bit, and continued to be active and grow her interests. She continued to work for another 10 years, and finally decided to slow down a bit and enjoy life. Betty enjoyed trips with her lifelong friend Marjorie Gottula. Together they traveled to Alaska and often spoke of the beauty of that area. She and Marjorie took a trip to France and toured England, France and Normandy Beach. They both felt blessed to be able to see key historic areas including much of the area where their husbands and the Allies secured victory in WWII. She made it a point to be involved in her grandchildren’s life as well, whether they lived locally or hundreds of miles away. Betty was able to witness and enjoy many things in life. Most recently, she enjoyed a mass gathering of her large extended family to celebrate her 90th birthday. It was a beautiful gathering, where everyone had stories to tell and the event was filled with laughter. On Saturday morning, April 17th, at the age of 91, Betty gently past this life and on to the next to be reunited with Joe and her daughter, Susan who preceded her in passing. Betty is richly survived by her sister, Francis “Fran” Alexander, three daughters, Sharon (Darrell) Jacques, Jo Ann (Michael) Winn and Arlene Martin, 8 grandchildren, and 15 great grandchildren. While the sounds of her laughter will be missed for a lifetime, the soreness of her passing will soon diminish and become part of who her family is today. A memorial to celebrate Betty’s life will be Friday, June 11, promptly at 11:15am at the Riverside National Cemetery in Riverside, California. (COVID protocol requires masks of all attendees.) Memorial contributions may be made to Ramona Bowl Amphitheatre (http://ramonabowl.com/).

In celebration of the life of Betty Lou Brown Martin Betty was born on January 2, 1930 to Elsie and Roy Frank Brown, in Hemet, California. Betty was a musically gifted, loving and humorous mother, wife and friend. In her youth, she attended... View Obituary & Service Information

The family of Betty Lou Brown Martin created this Life Tributes page to make it easy to share your memories.

In celebration of the life of Betty Lou Brown Martin

Send flowers to the Martin family.