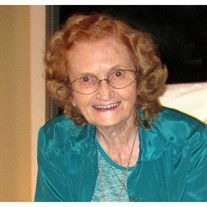 Flora Snow was born on July 1, 1931 to a farming family in the Ozark Mountains of Arkansas near a town called Lamar. She was the 7th child of eventually 8 kids but the last of 6 daughters. In her youth she had her chores to do and her mother Bertie was continually teaching her the skills of cooking, canning, washing, mending, etc. Her father Columbus planted corn, beans, and peanuts, but also breed horses and cattle to support the family on their 80 acre farm. Flora, however, thirsted for knowledge and excelled in school. About 1945, during her early teens, Flora committed her life to Christ and read the Bible avidly. After high school, her older sister Gladys paid for her to attend a Bible College in Arkansas. But after a flood left the college in shambles a year later, she moved to a similar Bible college in California where a lot of her friends were going. Here she met and married Ollen Hardin, a marriage that lasted 54 years. By 1955 they had their first son Ken and a year later Keith came along. While she and Ollen raised their children in the Southern California area, she became a bookkeeper to help pay the bills. During her life she had a keen interest in archaeology, especially when it came to American Indian artifacts and the Bible. She liked rock collecting too. Around the house she would decorate with all sorts of little “nick-knacks” like little figurines of animals, flowers, and children. Finding interesting old books and selling them was also an strong interest. However, her faith in Christ was always first and foremost in her heart. This was primarily expressed in volunteering at church and other Christian organizations. However, in the 1970s, her husband Ollen was becoming ill and had to take early retirement from elementary school teaching. Until his death in 2008, she was his primary caretaker. During the 1980s, they moved back to Arkansas and she proudly finished a Bachelor of Arts degree. When more grandchildren were born they were drawn back to California, and by the 1990s they had settled in Hemet. After Ollen passed on, she focused her attention on her interests and grandchildren. Then about 2012, her son Keith moved in with her and looked after her. Flora had had several operations over her life, but the last one, a hernia blocking her intestines, zapped her of strength and she didn't recover.

Flora Snow was born on July 1, 1931 to a farming family in the Ozark Mountains of Arkansas near a town called Lamar. She was the 7th child of eventually 8 kids but the last of 6 daughters. In her youth she had her chores to do and her mother... View Obituary & Service Information

The family of Flora Hardin created this Life Tributes page to make it easy to share your memories.

Send flowers to the Hardin family.