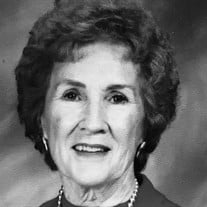 Patterson, Geraldine Audrey Geraldine (Gerry) Patterson (nee Johnson) passed away on January 14, 2019 at Brookdale Sunwest Senior Living in Hemet, CA, at the age of 90. The daughter of the late Earl and Elsie Johnson, Gerry was born on December 31, 1928 in Bay City, Michigan. She married Charles R. Miller, also of Bay City, following graduation from high school. The couple moved with their two sons, Lon Miller and Michael Miller, to Riverside, California in 1953, but subsequently returned to Bay City. In 1961 Gerry was married to John R. (Jack, Pat) Patterson, and the family expanded to include daughters Susan and Barbara Patterson, and son Robert Patterson. In 1966 the couple moved to Pomona, California, where they lived for a number of years while raising their family. Gerry and Jack subsequently moved to Palm Desert, El Centro, and Carpinteria CA before embarking on international assignments in Beijing, China and Cairo, Egypt. During this period they also made multiple trips to Europe and to various destinations in the United States. Gerry and Jack moved to Hemet in 1990. Jack passed away in November, 1998. Gerry had a close and loving relationship with her children, despite the fact that the family lived in widespread locations. She was an enthusiastic reader and a creative individual who pursued many arts and crafts projects in her spare time. She delighted in family get-togethers and was an especially huge fan of Christmas. She maintained a strong Christian faith throughout her lifetime. In addition to her parents, Gerry was preceded in death by her sister Evelyn Law, her brother Bill, and by Charles Miller and John Patterson. She is survived by her five children, Lon Miller (Karen) of Fort Collins, CO; Michael Miller (Patricia) of Jalisco, Mexico; Susan Bridwell (Tim) of Hemet, CA; Barbara Zuniga (Felix) of Merced, CA; and Robert Patterson (Vivian) of Lake Arrowhead, CA as well as by ten grandchildren and numerous great-grandchildren. Gerry’s remains were cremated at McWane Family Funeral Home in Hemet. A private memorial will be held in Hemet on February 3. The family would like to thank the staff at Brookdale Assisted Living and Arbor Hospice for their professional service and loving care. In lieu of flowers, the family requests that donations be made to Arbor Hospice.

Patterson, Geraldine Audrey Geraldine (Gerry) Patterson (nee Johnson) passed away on January 14, 2019 at Brookdale Sunwest Senior Living in Hemet, CA, at the age of 90. The daughter of the late Earl and Elsie Johnson, Gerry was born on December... View Obituary & Service Information

The family of Geraldine Audrey Patterson created this Life Tributes page to make it easy to share your memories.

Send flowers to the Patterson family.