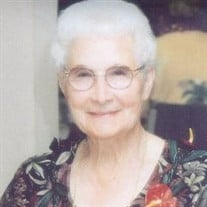 Hettie (Helen) Winnell King, age 95, of Hemet, California, passed peacefully in her sleep early Morning of Sunday, January 24, 2021. She was born on April 8th,1925, in Granbury, Texas, to Carrell and Lucindy Sledge. She spoke very fondly of her parents and of the farm where she grew up. She always had a story to tell about “Mother and Daddy” or one of her many beloved brothers, sisters, and cousins. Growing up on the farm instilled a strong work ethic and a love of gardening and simplicity that followed her throughout her life. During her early adult years, Hettie met and married Albert Wallace (Wally). They moved from Texas to Southern California where they had one beautiful daughter together, Patricia Ann. They opened and successfully operated “Bellflower Boat Yard” in Los Angeles County where Hettie was an integral part of the business. They enjoyed many years together in Norwalk, California. After Wally passed, Hettie continued her job as a bookkeeper to other boat shop owners until her retirement. Hettie’s loving nature, and possibly her delicious homemade pies, that brought her together with her second husband, Wiley A. King. They had both grown up on farms where family and hard work came first. They shared a love of gardening, fishing, and cooking. Their deep affection for each other was clear from the start. They married in Tahoe and spent many happy years together before moving from Norwalk, California to Dardanelle, Arkansas. Hettie will be missed dearly by those who were fortunate to know and love her. However, there is a comfort in knowing that she has been reunited with the people she loved and lost during her long and beautiful life. She laughed easily and often and made everyone near her feel like part of her extended family. Hettie is preceded in death by her first and second husbands, Albert Wallace and Wiley King, her step-son Gerald Wallace, her only daughter, Patricia A. Wallace, and seven of her siblings. She is survived by her one living sibling, Billy Joe Sledge, along with his wife Janyce. She has a large family of in-laws from the King family; Jack, Diane, Jimmy, Alice, and Marilyn. She leaves behind a legacy of six grandchildren; Keith, Rhonda, Lisa, Melanie, Jennifer, and Bob. There are also eleven great-grandchildren and eight great-great grandchildren. Additionally, there are countless friends and extended family members who have known and loved this remarkable woman who will smile every time they think of her. A small graveside burial and family service will be held at 2:00 pm on February 8th, 2021, at the Havana Cemetery in Havana, Arkansas. At her request, she will be laid to rest beside her husband, Wiley King. Arrangements will be handled by Cornwell Funeral Home in Danville, Arkansas.

The family of Hettie Winnell King created this Life Tributes page to make it easy to share your memories.

Send flowers to the King family.