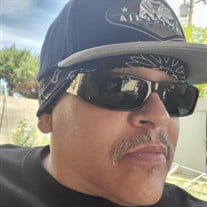 January 13, 2022 at 2:59pm after 28 days of fighting Covid pneumonia, Huston McFarland Jr., gained his wings with his wife by his side. Huston was born April 11, 1969 at San Gorgonio Pass Memorial, Beaumont, California, to Huston McFarland Sr., and Bernadine Louise Saye. He was a momma’s boy and grandma Bessie’s favorite. That’s where he got his love for cooking, and can cook his butt off. Huston Jr. graduated from Banning High School in 1987, shortly after he became a father to 3 beautiful children and vowed to always be there and take care of them, as he did. He was an amazing father and loved to love. He was excellent in sports with baseball being his favorite to play. He loved watching football! Go Pats!! Outstanding provider for his family. He had been working since he was 14 years old, mowing lawns and doing a paper route. He had several jobs in between and he entered his union Local 1184 in 1998. He was currently employed by C –Below. Huston Jr. is survived by his wife, Jaime McFarland, three sons, Huston McFarland III, Antywan McFarland, and Jakon Price. His four daughters, LaQuisha McFarland, Jalei Mayoral, Diamon Rocha, Juliana Everett. 10 grandchildren, Alayla McFarland, Millyanna McFarland, Novalee McFarland, A.J. McFarland, Jasella Robledo, Jr. Robledo, Ismael Rocha, Luna Rocha, Everleigh Mayoral, Raiden Mayoral. His sisters, Bridgette and Bessie McFarland and his brother, Otto McFarland. He had a host of nieces and nephews, brothers from another mother, family and friends. He was reunited with his mother, father, grandma, and brother Willie.

January 13, 2022 at 2:59pm after 28 days of fighting Covid pneumonia, Huston McFarland Jr., gained his wings with his wife by his side. Huston was born April 11, 1969 at San Gorgonio Pass Memorial, Beaumont, California, to Huston McFarland Sr.,... View Obituary & Service Information

The family of Huston McFarland Jr. created this Life Tributes page to make it easy to share your memories.

Send flowers to the McFarland family.