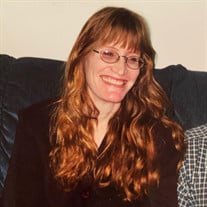 Julie Ann Perkins was born on September 22, 1967 to John and Sandra Schouten in Inglewood, California. She grew up in Hemet, California, on her parents’ dairy where she developed a keen fear of mice after one famously ran up her pants leg. She loved life on the dairy, growing up with her six siblings and Clowny the dog (which Julie named). She attended St. Hyacinth Academy where she excelled at sports, particularly track and field. Afterwards, she went to Notre Dame High School in Riverside. She would often reminisce about running through the orange groves while cross country training. She was even sent to Taiwan to represent the United States in a running meet. In high school she was studious, nerdy, and a straight arrow. Though she was an amazing student and athlete, those around her could only comment on her humility and excellent work as a team member. She also worked for a time at VIP Tots, helping children with disabilities, including her sister Angela who she loved so much. Julie later attended Cal State Long Beach college where she sought out adventure. Sporting a fresh new haircut and the latest fashion trends, she channeled her artistic expression into her persona and work. She was known to enjoy motorcycle racing with her friends, and loved music and dancing. It was at one of these dance clubs that Julie met the love of her life, Harry Perkins, in 1988. He was taken aback by her beautiful red hair. Their romance was a whirlwind as they shared long drives through the desert to look up at the stars and think about the future. At one point, Julie mused to Harry that “maybe I want a kid or two.” In 1989, the lovebirds eloped and began what would be their 31 years of marriage together. Five years in, the two confirmed their vows in the Catholic Church. Harry was deployed shortly after, but this did not diminish their affections for each other. The two wrote love letters back and forth throughout his deployment. She kept all of them in her keepsake box. In 1990 Julie had her first child, Ashley. From here Julie’s entire life was devoted to her children. After Ashley came Joshua, Andrew, Jacob, Justin, Kaleb, Dominic, Joseph, Elizabeth, and finally, Max. Julie took it on herself to homeschool each of the kids, which she viewed as one of her greatest accomplishments. Which it was, because each of those ten children inherited her stubbornness. Between her love for education, she also made sure to make time for family. Between walks at Rancho Park, where her kids would admire the lady bugs in the cool evening air, and the monthly birthday bash back at her beloved parents’ dairy, Julie was always present for her family. For those who knew her, it goes without saying that Julie was a holy woman. She was deeply involved in church ministries throughout the San Bernardino diocese. She was a powerhouse in the local pro-life ministry, organizing parades, outreach, and fundraisers. Julie taught each of her kids the values of respect and discipline. Her love of the Catholic faith was evident to all. Though she was diagnosed with breast cancer in 2016, she still thought only of others, and always smiled. She was a saint on earth, and after four years of battling cancer, is now a saint in heaven. She is survived by her husband and best friend, Harry, and their ten kids, two grandchildren, and the infinitely expanding number of extended family.

Julie Ann Perkins was born on September 22, 1967 to John and Sandra Schouten in Inglewood, California. She grew up in Hemet, California, on her parents&#8217; dairy where she developed a keen fear of mice after one famously ran up her pants... View Obituary & Service Information

The family of Julie Perkins created this Life Tributes page to make it easy to share your memories.

Send flowers to the Perkins family.