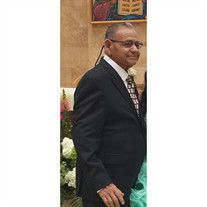 Librado Olivo, age 76, of San Jacinto, CA, went to be with the Lord on Wednesday, October 15, 2014, at Sharp Chula Vista Medical Center. Librado was born August 17, 1938 in Tynan Texas. He was the son of the late Feliberto Olivo and the late Estefana (Hernandez) Olivo. His mother passed away when he was very young and was raised by Encarnacion and Candelaria Garza. Librado was a union labor foreman in the construction profession for 40 years. His greatest accomplishment was giving his children the best education and seeing them all graduate with college degrees. He was a devoted family man to his wife and children. Librado was a volunteer with the San Jacinto Fire Department before the City had its own Fire Department. He dedicated countless hours of service to the community by being involved with Cops 4 Kids, Food for Life, and was the White Cane Chairman for the Lions Club. He was a mentor to many young people whom he helped get ahead. He was preceded in death by his siblings Eduvijes, Leonardo, Reynaldo, Esteban, Manuel Parra (Olivo), Alicia Lopez, Estella Galvan & Irma Barrietos, children Librado Jr. & Ricardo Olivo. He is survived by his loving wife of 54 years Vicenta Olivo, three daughters, Irasema (Pablo) Quilantan, Edalia (Jose) Gomez, Estella Olivo, three sons, Rene (Matilde) Olivo, Rolando Olivo, Ricardo (Janice) Olivo, one sister Dora Ortiz, one brother Encarnacion Garza Jr., nine grandchildren Gabriel Roman, Adrian Issac Gomez, Bianca Elena, Jessica Rochelle, Diego Ivan Quilantan, Marisol Matilde, Sebastian Rene, Eric Roman & Nicole Sofia Olivo. Many of our friends and family have asked what they could do for dad and family. We are so appreciated of the kindness, prayers and love that we have received. Our dad was a strong advocate for higher education. He spent many hours volunteering, mentoring and guiding youth in the San Jacinto Hemet Valley. Most recently he was involved with Cops 4 Kids and Communities where he touched the lives of many. In his memory donations may be made to COPS 4 Kids and Communities 208 East Devonshire Hemet CA for Librado Olivo higher education scholarships. Website C4KC.ORG (951)658-2677

Librado Olivo, age 76, of San Jacinto, CA, went to be with the Lord on Wednesday, October 15, 2014, at Sharp Chula Vista Medical Center. Librado was born August 17, 1938 in Tynan Texas. He was the son of the late Feliberto Olivo and the late... View Obituary & Service Information

The family of Librado Olivo created this Life Tributes page to make it easy to share your memories.

Send flowers to the Olivo family.