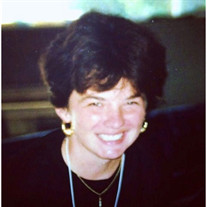 Lori Joy Wurgaft, age 43, of Hemet, CA, passed away on January 16, 2013. She was born on January 27, 1969, in Anaheim, California, the only child of Robert Wurgaft and the late Alice Snipes. She graduated from Hemet High School in 1987. Lori is survived by her former husband, Steven Keith, father, Robert, aunts Joy Van Ronkel and Beverly Munson, uncles Jim and Dan Munson, first cousin Tammy Gidcumb (husband Jim), and second cousins Maddie, Wyatt, Dalton and Charlotte Gidcumb. Her mother, Alice, preceded her in death. While growing up in Anaheim, Lori became an avid Angels baseball fan and attended many games at Anaheim Stadium with her mother. In 1979, she also played Little League baseball, and was the only girl on a team sponsored by Anaheim Parks & Recreation. She was voted team MVP that same year. Lori, who was diagnosed with Multiple Sclerosis in her early 20’s, was very active with the local MS Society. She created the first-time-ever MS Walk in Hemet and successfully managed the event for four years in a row. She also founded the MS Support Group Hemet Chapter. Lori was able to attend classes at Mt. San Jacinto Community College with the help of a volunteer. She was also active in the Lee DeForest Amateur Radio Club in Hemet for a number of years. Lori was a member of The Community Emergency Response Team (CERT), which educates people about disaster preparedness. She enjoyed attending church services at the Community Christian Church whenever she was physically able to. Lori also volunteered at the Ramona Animal Shelter, as she was always a lover of all animals. When her MS was in remission, Lori always tried to stay as active as she could. She enjoyed horseback riding and participated in numerous group activities through the Casa Colina Centers for Rehabilitation. She attended water sports events in Long Beach, rode on the Polar Express train, toured the Grand Canyon and even tandem sky dived. Most recently, she enjoyed her mornings by riding her electric scooter to the local donut shop to buy herself a coffee and donut. Lori held a special bond with her caregivers Flor Cluff and Rosa Hernandez. For the past six years the daughter and mother team helped Lori to manage living with her MS symptoms. Two years ago, Flor and Ben (husband) welcomed Lori into their home and was like a member of the Cluff family. She enjoyed helping the eight children of various ages in the household with their homework assignments. She also enjoyed playing games and watching videos with the younger children. Lori’s celebration of life will be held on Friday, February 15, 2013, at 11:00AM, at the Community Christian Church, 41762 Stetson Ave., Hemet, CA, 92544. In lieu of flowers, Lori requested that a donation be made to the Ramona Animal Shelter, Inc., 690 Humane Way, San Jacinto, CA, 92582. Entrusted to the care of McWane Family Funeral Home.

Lori Joy Wurgaft, age 43, of Hemet, CA, passed away on January 16, 2013. She was born on January 27, 1969, in Anaheim, California, the only child of Robert Wurgaft and the late Alice Snipes. She graduated from Hemet High School in 1987. Lori... View Obituary & Service Information

The family of Lori Joy Wurgaft created this Life Tributes page to make it easy to share your memories.

Send flowers to the Wurgaft family.