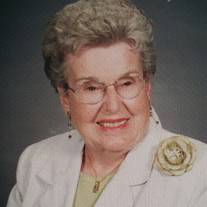 Marcella was born in Meredosia, Illinois on June 19,1923; the daughter of Alvin and Edith Unland. She had two brothers, Jack Leon who preceded her in death and Mark Unland, currently residing in St. Louis. On Oct.24, 1943 she married Martin Fricke, her high school sweetheart and together they had two daughters, Connie Diane and Cheryl Deane. She had 5 grandchildren, Brian, Mark, Lisa, Daren and Ryan and 13 great grandchildren. After growing up in Meredosia, she began her married life in Georgia where Martin was stationed in the army. At the end of the war they took up residence in St. Louis where Connie was born and then onto Springfield, Ill. where Cheryl was added to the family. They continued their young married life in Quincy, Ill. where Marcella worked part time as a secretary at the local country club. In 1960, the family moved west to Calif. where they settled in San Bernardino. Marcella worked in the secretarial capacity for the San Bernardino County Juvenile Probation Dept. until her retirement in ’87. Her retirement years were spent in Hemet where they had the joy of building their own home on the golf course and residing there from ’89 until her move to assisted living in Murrieta in Dec.’15. Throughout their lifetime Marcella and her husband, Martin, enjoyed many wonderful trips including vacations to Australia, New Zealand, Alaska, Canada, Hawaii and the Bahamas. Marcella was an active church member attending Our Redeemer in Quincy; Trinity in San Bernardino; St. John’s and Prince of Peace both in Hemet. She participated in Lutheran Women’s Missionary League, worked on producing books for the blind with the Lutheran Braille Workers, and donated her time and talents to various committees over the years. Her social interests included participating in a theater group enjoying local plays, card playing groups, and in later years Bunco, and Red Hats. She loved playing Dominoes and Skipbo in the evening hours with family and friends. Family gatherings were always very special to her whether it was making ice cream in the summer months, apple butter in the fall, or holiday get-togethers. She continually remembered her grandchildren and great grandchildren with cards and money sent on their birthdays. Marcella always had an unexpected sense of humor and would think of others first and for most above herself. She truly lived her Christian life every day with her patience, kindness and love for others! The family requests in lieu of flowers that donations be made to Prince of Peace Lutheran Church in Hemet for the Braille Ministry Program.

Marcella was born in Meredosia, Illinois on June 19,1923; the daughter of Alvin and Edith Unland. She had two brothers, Jack Leon who preceded her in death and Mark Unland, currently residing in St. Louis. On Oct.24, 1943 she married Martin... View Obituary & Service Information

The family of Marcella Deane Fricke created this Life Tributes page to make it easy to share your memories.

Send flowers to the Fricke family.