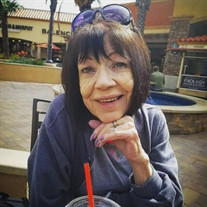 Margaret “Maggie” June Rutigliano left this world peacefully, holding the hand of her husband, John on Wednesday, January 19, 2022. She was born in Pine Bluff, Arkansas on August 21, 1948, to Noah Mack Merrill and Maggie Virginia Merrill. She was the youngest of four children. Her family moved to Arizona, where she met and married John Walter Rutigliano on May 14th, 1967. Maggie and John moved throughout the southern United States and Germany during the early years of their marriage while John served in the United States Army. They had three daughters, Linda Renee, Stephanie Alicia, and Tamera Ann. Maggie was preceded in death by her parents and two brothers, Noah Mack Merrill Jr. and James Edward Merrill. She is survived by her husband of 54 years, John Walter Rutigliano, her daughters, Linda Renee Proffitt, Stephanie Alicia Russell, and Tamera Ann King, Her sister, Virginia Ann Alvarez, and grandchildren, Andrew John Rutigliano, Brandye Margaret Rutigliano, Corey Justin King, Taylor Marie King, Dallas Nicole Price, Mathew Lawrence King, Morgan Alicia Russell, Austin Michael Proffitt, Brielle Grace Vasquez, and Logan Anthony King, and many great grandchildren. She always had a bubbly disposition and such a caring nature about her. She loved to laugh and had an infectious sense of humor. She loved and was loved by all her who knew her. This world will not be the same without her. She will forever be within our hearts.

The family of Margaret June Rutigliano created this Life Tributes page to make it easy to share your memories.

Send flowers to the Rutigliano family.