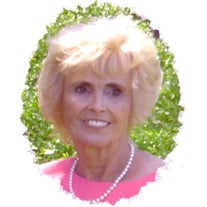 Margie Ann Hough Gray Margie Ann Hough Gray, of Hemet , California passed away on Wednesday, April 6, 2011 at the Village Assisted Living Center in Hemet , CA surrounded by her children and family. Margie was born on July 15, 1935 in Council Bluffs , Iowa . She moved to Hawthorne , CA , at an early age where she graduated from Leuzinger High School in 1953, and met and married George H. Gray. They moved to Hemet in 1957. She was a loving daughter, sister, mother, grandmother and friend to all. She was an active member of the Church of Jesus Christ of Latter Day Saints and held many callings throughout her life. She will be missed greatly by all who knew her. Margie was preceded in death by her oldest son, George Houston Gray, Jr., in 2009. She is survived by her children; Scott (Ann) Gray of Hemet, Bradley Gray of Hemet, Dallas (Teresa) Gray of Delta , UT, and Kelly ( Brad) Fisher of Hemet, Holly (Brian) Caskey of Cary, NC. Margie has 6 children, 20 grandchildren, and 15 great grandchildren. Arrangements have been entrusted to the care of McWane Family Funeral Home, in 350 N. San Jacinto Street , Hemet , CA . Funeral services will be held on Friday, April 15, 2011 at the LDS Church Park Hill Bldg., 1151 Park Ave. , San Jacinto , CA . There will be a viewing Thursday, April 14, 2011 from 6:00P.M to 8:00P.M. at McWane Family Funeral Home, in 350 N. San Jacinto Street , Hemet , CA . Interment following the funeral services at the San Jacinto Valley Cemetery .

The family of Margie Ann Gray created this Life Tributes page to make it easy to share your memories.

Send flowers to the Gray family.