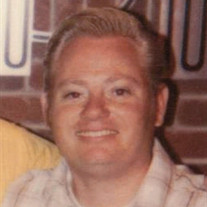 On January 18, 1971 a white haired, blue eyed baby was born with translucent skin even his ears and the tops of his feet would burn in the sun. Martin Allen "Marty" Hubbard was the last of six children born to Jessie Beatrice Wright and his father David Allen Hubbard. His mother soon remarried and David Ray McNary would be the man in Marty's life. In May of 2012 Marty was diagnosed with cancer devastatingly altering his life and the life of his family forever. After four long years of giving God the fight of a lifetime he lost his battle and joined Him in Paradise on June 9, 2016. He went out swinging, a fighter until the end. He is survived by his mother, his four sisters, Jeanette Thatcher, Terry Krahling, Patricia Parada, Charlene Jordan, and his only brother Vince Freeman. Marty's main priority in life was his family. He served 27 years to Stater Bros. Market creating friends who turned into family and to provide and guarantee his wife and children did not have to go without. That same work ethic survives in his children. He vowed to his wife Monica Hubbard and four children Alyssa Hubbard, Christian Hubbard, Deanna Castillo, and Alejandra Castillo, to love them unconditionally and support them in all of their endeavors. Family night was every night with a shmorgasborg of "snacky-poos" and Monopoly. Family vacations were taken once, sometimes twice, a year where Marty taught everyone the basics of camping and how to be MacGyver rigging everything from tents to laws. The house was filled with his boisterous laughter every Christmas when A Christmas Story would play on loop on TV, after all it was his favorite holiday. He would pile anyone who was willing into the Suburban, and traditions were made like picking the perfect tree, driving down Candy Cane Lane, and getting lost. Every car ride was an adventure with Marty creating lifelong memories for all those who were blessed to know him. Although he was taken from us too soon, we will always remember him as the loud, robust, obnoxious, rosy man who taught us what life is all about. His love lives on eternally as he smiles on us from above. Marty will never be forgotten. "Give a man to fish and you feed him for a day; teach a man to fish and you feed him for a lifetime."

On January 18, 1971 a white haired, blue eyed baby was born with translucent skin even his ears and the tops of his feet would burn in the sun. Martin Allen "Marty" Hubbard was the last of six children born to Jessie Beatrice Wright and his... View Obituary & Service Information

The family of Martin Allen Hubbard created this Life Tributes page to make it easy to share your memories.

Send flowers to the Hubbard family.