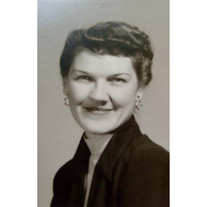 Mavis Etta Price “A life well lived, a life well loved” February 1, 1930 - December 29, 2012 Mavis passed away peacefully on Saturday December 29th, 2012, with family by her side at home in Hemet, California. Mavis was born in Mount Vernon, Texas on February 1, 1930. She moved to California in the 1950’s and settled in Indio, California. Mavis worked for a famous hotel in Indian Wells, CA, frequented by celebrities. She met her husband, Clyde; they married and moved to San Diego in the early 1960’s. Mavis was a wonderful homemaker and mother to their two little girls, Karen and Kristi. In 1974, they moved to Idyllwild and ran the Idyllwild Inn Motel. Mavis enjoyed camping, reading, sewing, bowling, cooking, and crossword puzzles. Her favorite pastime, however, was spending time with her family. Mavis often said all she wished to be in life was a good mom. She was a wonderful mom and an example to all of what a mom should be. Mavis loved her family more than anything. While her formal education took her only to seventh grade, she was very intelligent with an infinite amount of wisdom which she imparted to her children and grandchildren. Mavis was cheerful and grateful to the very end of her life. She was a treasured part of our family and her passing has left us with an empty place in our hearts. Mavis is survived by her daughters, Karen Bailey (Marshall), Kristi McCreary (Tom); seven grandchildren, Teryn George (Randy), Gwendolyn Ferris (Trent), Caitlin Galey, Lauren Bailey, Collin Galey (Brittnie), Matthew McCreary (Elizabeth), Dillon Galey; and three great grandchildren, Riley, Brayden, and Peyton. She is also survived by her siblings, June Whitten, Helen Cotten, and Franklin Kirby, all of Texas, and numerous nieces and nephews. Mavis also leaves behind her beloved friend and caretaker, Sherry Sanchez, whose help and love for mom over the past nine months meant everything to our family. Mavis touched every person she met in life. The family wishes to express their sincere gratitude to Inland Empire Hospice and Brigette, our wonderful hospice nurse, whose skills and knowledge greatly improved Mavis’ life over the last year. “LIFE IS GOOD”

The family of Mavis Etta Price created this Life Tributes page to make it easy to share your memories.

Send flowers to the Price family.