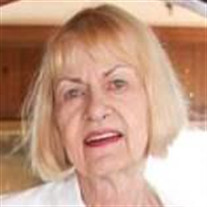 Patricia Lucero June 22, 1935 – February 9, 2022 Moreno Valley, California – Patricia Lucero (nee Patricia Ann Stephens) was born at Fort Meade, South Dakota to Emerson and Thelma Stephens. Patricia lived with her family at Fort Meade and in Deadwood, South Dakota until the passing of her mother in 1942 and her father in 1949. Patricia was the Great Granddaughter of early Black Hills settlers and German immigrants Paul and Margaretha Kleemann, who built the Kleemann House in Custer, South Dakota in 1883 after first arriving in the Black Hills in 1877. After the passing of both of her parents, Patricia was raised in Oklahoma City and Wichita Falls, Texas by her Stepmother Erin Stephens, who was fondly known by her grandchildren as “Grannie Mac.” Patricia lived in Erlangen, Germany from 1946 to 1947, where her father was stationed and involved as an administrative officer during the Nuremburg Trials. Patricia was El Centro, California’s first meter maid in the early 1960’s and was a director of security for department stores in Southern California in the 1960’s. Patricia was preceded in death by her husband Al Lucero in 2001. She is survived by her daughter Victoria Cross (Jeffrey), her son Richard Uebel, her son Michael Uebel (Genevieve), her daughter Cheryl Love, her son Charles Day and her two grandchildren, Derek Uebel in Sturgis, South Dakota and Shane Uebel in Annandale, Virginia. Patricia will be remembered by all who knew her for her graciousness, independence, intelligence, and sweetness.

The family of Patricia Ann Lucero created this Life Tributes page to make it easy to share your memories.

Send flowers to the Lucero family.