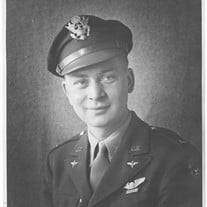 Paul D. Salley, Lt. Col. USAF Retired, 91, of Hemet, CA, passed away on Saturday, August 23, 2014, at Desert Regional Medical Center in Palm Springs, CA. Born on July 3, 1923 in Colton, CA; he was the eldest son of the late William and Birdie Salley. A proud American, Paul enlisted in the United States Army Air Corps at the age of 19. He served in the United States Army Air Corps and the United States Air Force during World War II, the Korean War, and the Vietnam War. He flew 30 missions over Europe in B-24 Liberator bombers during which he received the Distinguished Flying Cross, and then transitioned to the B-47 Stratojet, the nuclear delivery bombers in the Strategic Air Command. He finished his career flying C-130 aircraft for the Military Airlift Command, which included a year with the United States Air Force Thunderbird Air Demonstration Team. After a twenty-year career on active duty and in the Reserves, he retired with the rank of Lieutenant Colonel. However, despite this impressive accomplishment, he remained humble. His service was not for prestige, but for the privilege to serve. After retirement from the United States Air Force, Paul enjoyed a short career as a banker but his passion for flying continued for many more years. He flew as a commercial pilot for a commuter airline, as a charter pilot for Hemet Ryan Aviation, for the United States Navy as a civilian contract pilot dropping electronic warfare drones, and as an air tanker pilot for the United States Forestry Service. He even found time to collaborate, build and fly an experimental open cockpit, bi-wing high performance airplane. Paul owned several of his own airplanes for many years and loved to take friends and family flying with him. Paul will be remembered as a witty, kind, loving, generous, honest, and humble man who devoted himself to his family. He enjoyed traveling especially to Hawaii and Mexico. Although Paul lived in California for over fifty years, he often visited friends and Family in Akron, which is a small town on the plains of Colorado near where he grew up on a farm. He loved eating cake and ice cream and having his family around to share it with him. He was an avid reader and history buff. He was especially passionate about anything to do with flying. He was a loyal fan of the Los Angeles Angels and enjoyed attending Spring Training in Arizona. During the last two years of his life, Paul regularly attended Calvary Chapel Valle Vista. He actively supported various missions in which the church is involved. Paul is preceded in passing by his beloved wife, Mary Lou Salley and sister, Phyllis Peters. Paul is survived by his children, Richard Salley, Linda Mistele, and Evelyn Richards; siblings, Glen Salley, Mary Ann Saffer, Barbara Wilson, Bill Salley, and Sandy Vaughn; eight grandchildren; and two great-grandchildren. A viewing will be held on Thursday, September 4, 2014 from 4:00 p.m. to 8:00 p.m. at McWane Family Funeral Home, 350 N. San Jacinto Street, Hemet, CA. A funeral service will be held to celebrate Paul’s life on Friday, September 5, 2014 at 11:00 a.m. at Calvary Chapel Valle Vista, 44200 Palm Avenue, Hemet, CA. A reception will immediately follow the church service at the same location. The memorial service to honor his service to his country will be held that afternoon at 2:01 p.m. at Riverside National Cemetery, 22495 Van Buren Boulevard, Riverside, CA. Memorial Contributions may be made in Paul’s name to the March Field Air Museum located at March Air Reserve Base, California. You may either mail your donation to P.O. Box 6463, March ARB, CA 92518 or contribute online at http://www.marchfield.org/donate/.

The family of Paul D. Salley created this Life Tributes page to make it easy to share your memories.

Send flowers to the Salley family.