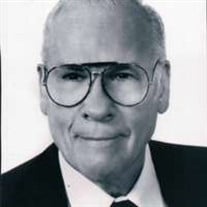 Richard G. Mills of Hemet, known as Evangelist Dick Mills, born Feb. 5th, 1922 in Oakland, CA, passed away May 25th, 2012, in Anza, CA, at the age of 90. He grew up in Stockton, California, and enlisted in the US Air Force, serving during WWII while stationed at La Junta Air Base in Colorado. After the war ended in 1945, he enrolled in L.I.F.E. Bible College in Los Angeles, and upon graduating in 1949, entered the ministry. In the early 1950's he pastored churches in Saugus and Oceanside, CA, but soon became a travelling evangelist, preaching on Indian Reservations and churches throughout the USA and Canada. In 1958, he did missions work in Central America and Cuba. Beginning in the mid-1960's, he began to be in demand as a guest minister and teacher in Australia, New Zealand, Britain, various European countries, as well as Nigeria, South Africa, Israel, and southeast Asia.Rev. Mills was also known as a prolific writer, authoring books such as "He Spoke And I Was Strengthened", his Daily Devotional in two Volumes, the Greek Word Studies for the Spirit Filled Life Bible, and co-authored with his son David the book "Messiah and His Hebrew Alphabet". In the 1970's he was an Adjunct Professor in a Bible school in Anaheim, CA, and served for the next two decades as a guest lecturer at Christian Colleges and training centers throughout the USA and Canada. Additionally, Rev. Mills was an occasional guest on various Christian Television networks. Over the course of his lifetime, he compiled a vast personal library of Bible translations, commentaries, Bible dictionaries, books from antiquity, lexicons, and devotional books.Richard G. Mills is survived by his loving wife of 55-years, Betty Mills of Hemet; his son David Michael and daughter-in-law Kathy Michael of Hemet; his daughter Deborah Booth and son-in-law Kyle Booth of Anza, his seven grandchildren: Shoshana Adams, Rachel Tucker, Judah Israel Michael, Joel Michael, who grew up in Hemet, and Blake Booth, Cardiff Booth, and Whitney Booth, who grew up in Anza. Also, Rev. Mills is the great-grandfather of three young children: Elijah Tucker, Aliyah Tucker, and Lyla Adams. He is also survived by three sisters: Virginia Wigmore of Massachusetts, Leah Payne of Tulare, CA, and Toni Cunningham of Fresno, CA. In addition to being greatly missed by his family, Dick Mills will be missed by vast numbers of people worldwide, to whom he ministered personally in his 64 years of active, travelling ministry. He is greatly loved by many people, as the volume of the expressions of appreciation currently coming in attests. His devotion to the Lord and to people has has been a hallmark of his life for many decades.Memorial Services for Richard G. Mills will be held at the Dwelling Place Family Church, 27100 S. Girard Street, Hemet, CA 92544 at 10:00 a.m. on Friday, June 1st, 2012.For further information, see his ministry website: www.dmm.org and check Facebook for the page "Dick Mills Ministries".

Richard G. Mills of Hemet, known as Evangelist Dick Mills, born Feb. 5th, 1922 in Oakland, CA, passed away May 25th, 2012, in Anza, CA, at the age of 90. He grew up in Stockton, California, and enlisted in the US Air Force, serving during WWII... View Obituary & Service Information

The family of Richard G. Mills created this Life Tributes page to make it easy to share your memories.

Send flowers to the Mills family.