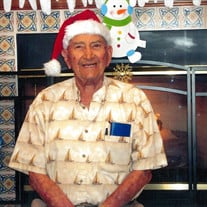 Robert Hamilton (Bob) Fore passed away on February 10, 2014, in Hemet, California at the age of 99. Bob was born in Georgetown, South Carolina, to Edward C. and Carrie Belle (Foster) Fore. His parents met while Ed worked for a locomotive parts foundry and Carrie was a teacher. The family moved to Union, SC, where Ed opened a small store. Bob graduated from Union High School, joined the Civilian Conservation Corps, and was assigned to Kingstree, SC, where he met his future wife, Mary Alice Steele. Bob joined the Marine Corps and married Mary Alice. During his twenty years in the Corps he worked in communications, completed flight school, was a dive bomber pilot in the South Pacific during WWII, and was awarded a Distinguished Flying Cross. He later served in Japan and Korea and retired as a Lieutenant Colonel. Two sons, Robert Jr. and then Raye, were born shortly after the war. After military retirement the Fores lived in Newport Beach, California, where Bob explored real estate then shifted to aerospace for fifteen years, with the Air National Guard, Douglas Aviation, and North American Aviation, where he worked on the Apollo 11 rocket program, the first American mission that landed men on the moon. When he finally really retired, he and Mary Alice moved to Hemet in 1971. Bob said he first became interested in Hemet while in the Marines and flying over it. Bob was predeceased by his wife, Mary Alice, and by his brother, Hugh. He is survived by his sons, Raye and Bob Jr. (or Buzz to those who knew him as a child); grandchildren, Robert III (Rob), Jonathan (Jon), and Matthew (Matt); and eight great-grandchildren, Meredith, Lara, Charlotte, Emma, Jack, Michael, Marcus, and Micah.

Robert Hamilton (Bob) Fore passed away on February 10, 2014, in Hemet, California at the age of 99. Bob was born in Georgetown, South Carolina, to Edward C. and Carrie Belle (Foster) Fore. His parents met while Ed worked for a locomotive parts... View Obituary & Service Information

The family of Robert Hamilton Fore created this Life Tributes page to make it easy to share your memories.

Send flowers to the Fore family.