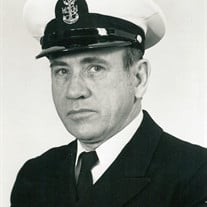 Robert J. McCormick passed away November 4, 2015 in Hemet CA at the age of 91. He was born to Frank and Nellie (Mulligan) McCormick on June 12, 1924 in Beatrice, NE. Robert grew up in Lincoln, NE and was a graduate of Lincoln High School. While in high school, he held a part-time job at Riggs Optical Company in Lincoln. He attended the University of Nebraska for one year before enlisting in the US Navy as a reserve, and served as an instructor at the Naval Training Center in Lincoln until 1946. While he remained as a reserve, he worked as a Brakeman for the CB&Q Railroad in Lincoln. Robert married Edith Vyhnalek on May 6, 1952 and they enjoyed a life of traveling extensively during Robert’s tours of duty at various stations and ships. They had the privilege of living in Nebraska, Illinois, Kansas, California, Hawaii as well as Midway Island. In 1951 he was recalled to active duty with the U.S. Navy to serve at the Lincoln U.S. Naval & Marine Core Reserve Training Center from 1951-1954 and the US Navy Great Lakes Training Center in Quincy, IL from 1954-1958. Robert served at the Naval Training Center in Emporia, Kansas from 1959-1961. From 1962-1975, Robert did his Foreign Sea Service as well as working at the Naval Command Station in Stockton, CA. On November 11, 1975 Master Chief Petty Officer Robert J. McCormick retired from the US Navy with twenty years, 4 months and 5 days of total active service including 4 years, 3 months and 10 days of Foreign & Sea Service. He served his country well from World War II, through the Korean War and the Vietnam War. His service included being in the American Area Asiatic Pacific with service on the USS Segundo as well as several U.S. Navy Carriers. Robert received many medals and ribbons for his exemplary service to the U.S. Navy as a Master Chief Radioman. These include the National Defense Service Medal & Ribbon, Vietnam Campaign Medal, Armed Forces Expeditionary Medal, Military Justice in the Navy as well as the Good Conduct Medal being awarded to him eight times. Education was important to Bob, so he returned to college after his retirement and received his Associate in Arts Degree from San Joaquin Delta College in Stockton CA in 1980. He also obtained his Real Estate License in northern CA and enrolled in computer classes at Mt. San Jacinto College. For many years he held an Amateur Radio License and enjoyed talking with friends around the world. This license even allowed both Bob and Edith to speak with family members while they were stationed on Midway Island in the Pacific. Robert was proud of his service and held a life membership in Veterans of Foreign Wars, Disabled American Veterans and the Fleet Reserve Association. He was a member of The Hemet United Methodist Church. Robert resided the last six years of his life at Brookdale Assisted Living in Hemet, CA. Robert was predeceased by his parents, three sisters and spouses, plus four brothers and spouses. He is survived by nieces Lorene Colin (Robert), Diane Vyhnalek (Stephen Carlson); nephews Robert Divoky, Alvin Vyhnalek (Marilyn), Allan Vyhnalek (Mindy), Warren Vyhnalek (Sandy), Loren Vyhnalek (Judy), Lester Davidson, Lloyd Davidson and Jack D McCormick (Linda). Robert will be greatly missed but never forgotten by those who had the honor to know and love him.

Robert J. McCormick passed away November 4, 2015 in Hemet CA at the age of 91. He was born to Frank and Nellie (Mulligan) McCormick on June 12, 1924 in Beatrice, NE. Robert grew up in Lincoln, NE and was a graduate of Lincoln High School. While... View Obituary & Service Information

The family of Robert J. McCormick created this Life Tributes page to make it easy to share your memories.

Send flowers to the McCormick family.