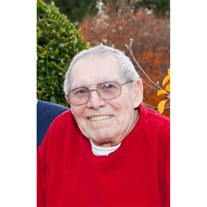 Robert James Wagstaff I, born on March 29, 1928 in LosAngeles , California enteredeternal life on July 27,2010 in Hemet , California . A resident of Hemet since 1991, Mr.Wagstaff lived in Southern California all his life, attending South Gate High School (’46) and Compton College . He served five years as a reserve in the U.S.Navy and as an airman in the Korean war from 1950-1954. Mr. Wagstaff retired as a journeyman wireman,having been a member of the International Brotherhood of Electrical Workers,Local 11, District 6, for 35 years. Formerly he resided in Santa Fe Springs, Downey , Canyon Lake , and Fullerton .Mr. Wagstaff was an avid reader and he enjoyed watchingsports on television. Locally he volunteered for the Police Activity League ( PAL ) for many years. He was devoted to his grandchildren living in Hemet caringfor them daily after school. For most ofhis life he was an active member of the Knights of Columbus in SouthGate and Fullerton . He served as a Little League Baseball coachin the 1960s and an Assistant Scout Master for the Boy Scouts of America in the1970s.Mr. Wagstaff is preceded in death by his parents Reginaldand Marguerite Wagstaff and his brother Donald Wagstaff. He is survived by his wife of 53 years,Barbara; two sons, Robert II (Cindy) of Hot Springs Village , AR , Jeffrey (Grace Woo) of Pittsford , NY ; and a daughter, Sharon Drew (DonaldWindham) of Hemet ;three grandsons, James Thomas Drew, Brian Drew, and Robert Wagstaff III . Additionally he is survived by three brothers: Reginald and Paul ofHemet and Gary of Hesperia, California ,and numerous nieces and nephews. A Mass of Christian Burial will be celebrated at Our Lady ofthe Valley Catholic Church, 780 S.State Street in Hemet at 10 a.m. on Tuesday, August 3, 2010,the Rev. Thomas J. Elewaut celebrant. PallBearers: Brothers Gary and Paul Wagstaff; Grandsons J.T. Drew and RobertsWagstaff III ; Brothers-in-lawRoberts and Richard Elewaut. Internmentwill follow at the Riverside National Cemetery . In lieu of flowers, memorial donations may bemade to the Salvation Army or Visiting Nurse Association of the Inland CountiesHospice of Murrieta, 39815 AltaMurrieta Dr. , Suite C-8, Murrieta , CA 92563 . Entrusted to the care of McWane Family Funeral Home.

The family of Robert James Wagstaff created this Life Tributes page to make it easy to share your memories.

Send flowers to the Wagstaff family.