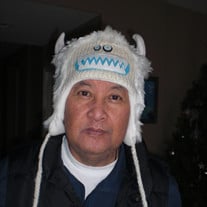 Rolando E. Aquino, age 65, of Hemet, CA passed away on Sunday, January 10, 2016 at his home with loving family by his side. Born on November 19, 1950 in Nueva Ecija, Philippines; he was the son of Hermogenes and Consolacion Aquino. Rolando is survived by his loving wife of 39 years, Mila Aquino; daughter, Marika Aquino and husband Thomas Osborne; daughter, Samantha Aquino; son, Rolando Aquino II; sister, Corazon Agustin; sister, Flordeliza Agsalon; brother, Arturo Aquino; and granddaughter, Fiona Osborne; stepmother, Luisita Aquino, and the rest of his siblings, Renato, Josephine, Joseph, Susan, Felicia, Luzviminda and Aileen. Gifted with numbers, Rolando earned his Bachelors Degree in Statistics. He was also avid chess player and was a member of the University of the Philippines chess team which won several tournaments. It was in college where he met the love of his life, Mila. The perfect balance for one another, they married on February 11, 1976. They migrated to US in 1980 with the help of his sister, Corazon and Brother-in-law, Cesar. Rolando spent a few years as a real estate broker, a job he enjoyed due to his love of interacting with people. In 1996, he and his wife combined their talents and skills and opened a medical billing business. He was a kind man who loved his family and the Lord. Whether it was praying his novena or visiting his favorite place, Holy Hills in Wisconsin where he loved to hike and pray at each of the Stations of the Cross, Rolando was devoted to his faith. An avid jokester, he enjoyed a good prank. He loved to laugh and constantly teased his friends, family, and even people he just met. His warm personality made everyone comfortable right away. He also had a passion for telling “tall tales” which frustrated his children to no end as that they always believed him. His outlook in life was money and how to not spend too much of it. He had a deep appreciation for a good bargain. A great sale at the grocery store meant to buy it in bulk (let's buy 50!). His fondness for being frugal has been a long running family joke. Although he was frugal with many things, he was always very generous with his children and ensured they were never left wanting. His love was timeless, sincere, and effortless.

Rolando E. Aquino, age 65, of Hemet, CA passed away on Sunday, January 10, 2016 at his home with loving family by his side. Born on November 19, 1950 in Nueva Ecija, Philippines; he was the son of Hermogenes and Consolacion Aquino. Rolando... View Obituary & Service Information

The family of Rolando E. Aquino created this Life Tributes page to make it easy to share your memories.

Send flowers to the Aquino family.