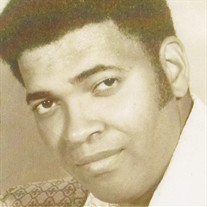 Surrounded by his family, Ronald Derek Murdock, 75, passed away on March 5, 2019 at Temecula Valley Hospital in Temecula, California. Ronald was born on May 5, 1943 in Chicago, Illinois, to his late father Chauncey Murdock, and late mother Maeola Greene. In July 21, 1963 Ronald married his High School sweetheart who he had met during a basketball tournament Bettye Faye (Johnson) Murdock. They spent fifty-five wonderful years together and he became a father of a beautiful daughter Linette Williamson (Murdock). Ronald was a lovable grouch, who loved his family more than life itself. He was very social, friendly, talkative, and loved traveling and vacationing with his family. Ronald loved football and basketball and was an avid Dallas Cowboys, Indiana Colts and Oakland Raiders fan. Western movies were his favorite to watch with his family and friends. In high school Ronald was a great varsity basketball player. After high school Ronald served 4 years in the United States Air Force as a radar repair technician. He spent time overseas in Germany and Turkey. After his Air Force service he finished college with a Bachelor of Science degree in business and served more than 30 years in the United States Department of Defense, first for the Air Force Cruise Missile Program then in logistics for the Department of the Navy. He required a high level security clearance for all of his work and when asked what he does for a living he would simply say, “I could tell you, but then I would have to kill you.” After his Department of Defense service he finished out his career working for various defense contractors. The safety and security of the United States was always important to Ronald and he enjoyed his work and will be laid to rest with full military honors for his service to our country. Ronald is survived by, his wife (Bettye), daughter (Linette), son-in-law (Steven), two amazing grandchildren (Steven II and Sarah), three great-grandchildren (London, Sloane, and Jack), his siblings (Gerald, Bette, Cathy and Roxanne) and many nieces, nephews and is preceded in death by his brother Chauncey Murdock. He was an exceptional, extraordinary husband, father, grandfather and uncle who is loved and missed by many.

Surrounded by his family, Ronald Derek Murdock, 75, passed away on March 5, 2019 at Temecula Valley Hospital in Temecula, California. Ronald was born on May 5, 1943 in Chicago, Illinois, to his late father Chauncey Murdock, and late mother Maeola... View Obituary & Service Information

The family of Ronald Derek Murdock created this Life Tributes page to make it easy to share your memories.

Surrounded by his family, Ronald Derek Murdock, 75, passed away...

Send flowers to the Murdock family.