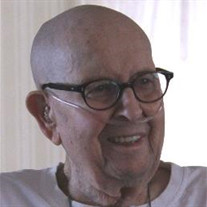 Roy M. Fredrickson, 90, of Hemet, California passed away on Thursday, January 5, 2017. Born on January 21, 1926 in Chicago, Illinois he was the son of the late Oscar and Hilma Fredrickson. Most of Roy’s career was spent in the insurance industry. Later in life he went to work for the U.S. Postal Service as a mail carrier, before transferring into Maintenance. This fit him like a glove because he was a Mr. Fix-It and he was happy to use his talents as a locksmith and repairman before he retired. Even though Roy was very much of a disciplinarian when his children were growing up, he did have a soft side and a great sense of humor. He was a great joke teller and loved to kid around with his children, especially his daughter Mary Lou because she was so gullible. What brings the greatest comfort to his children is that he is now joined with the love of his life, Lillian Fredrickson, and they are looking down on them with a big smile, hand in hand. Roy is survived by his three children, Jim Fredrickson with husband Steve Stewart, Mary Lou Riggs with husband Steven, and Patti Springer with husband Wade, four grandchildren, Matthew, Sara, William, and Robert, and four great-grandchildren, Kira, Jack, Ella, and Charlie. Roy was preceded in death by his beloved wife, Lillian Fredrickson in December of 2015. Roy served our country honorably in the U.S. Army during WWII from 1944 to 1946. Roy will be deeply missed by everyone who had the honor of knowing him. Interment will be held privately at Riverside National Cemetery.

Roy M. Fredrickson, 90, of Hemet, California passed away on Thursday, January 5, 2017. Born on January 21, 1926 in Chicago, Illinois he was the son of the late Oscar and Hilma Fredrickson. Most of Roy&#8217;s career was spent in the insurance... View Obituary & Service Information

The family of Roy Martin Fredrickson created this Life Tributes page to make it easy to share your memories.

Roy M. Fredrickson, 90, of Hemet, California passed away on Thursday,...

Customized sympathy cards. Mailed for you.