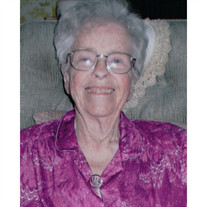 Ruth Munson, age 89, of Hemet, CA, passed away on December 6, 2012. She was born on July 17, 1923, in Brooklyn, New York, the only child of Ralph and Mae Horner. She attended Brooklyn College in 1942. She married Buell Munson in 1942 and moved to Spokane, Washington, where Buell worked for the US Army Signal Corp as a radio technician. In 1944, when Buell enlisted in the US Navy, Ruth followed him around the country while Buell continued his Navy training. Ruth worked at local five and dime stores and for local banks to supplement their income during her husband’s training. When Buell was discharged from the Navy, they settled down to raise a family while living in upstate New York. In 1961, Ruth and her family moved to Southern California where Buell took a job in the Aerospace Industry. Ruth went back to college to earn a teaching credential and went on to teach Pre-School for about 15 years. Ruth, an accomplished pianist, also learned to play guitar and autoharp and enjoyed singing songs with her pre-school students. She also sang with the Sweet Adeline’s chorus and in a barber shop quartet. She was an active supporter of various school band and choral booster clubs for all three of her children. Buell and Ruth retired to Hemet in 1980, where they were both very active in many projects with the Hemet United Methodist Church, the local affiliate of the National Alliance on Mental Illness and sang with the Happy Harmoneers. In her later years, she was most happy spending time in her husband’s garden or sitting on the porch enjoying the humming birds and wild birds eating from her three bird feeders. She also enjoyed spending time with her four great-grandchildren. Ruth is survived by two sons: Jim (wife Beverly), and Dan; two granddaughters: Tamera (husband Jim), and Lori; and four great-grandchildren: Madeline, Wyatt, Dalton and Charlotte. Daughter Alice preceded her in death. Buell, her husband of 69 years, passed away recently on August 14, 2012. Ruth’s celebration of life will be held on Thursday, December 13, 2012, at 11:00AM, at the Hemet United Methodist Church, 530 S. Buena Vista St, Hemet, CA. In lieu of flowers, the family requests that a donation be made to NAMI Mt. San Jacinto, P.O. Box 716, San Jacinto, CA, 92581. Inurnment at Riverside National Cemetery is pending. Entrusted to the care of McWane Family Funeral Home.

The family of Ruth Munson created this Life Tributes page to make it easy to share your memories.

Send flowers to the Munson family.