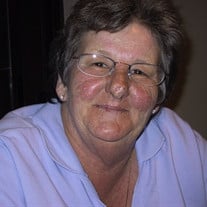 Sharon Francine Gillen was born on May 11, 1949 in Richmond, California to Bertina Paulson of Chadron, Nebraska and Orlin Spencer of Marshall, South Dakota. She spent her early years in San Pablo, where her mother and grandmother, Nellie Viola, ran a neighborhood diner off 25th Street. In 1961, Sharon moved with her mother to San Diego, where she attended high school. Shortly after, she met Albert “Duke” Gillen. Duke and Sharon married in the winter of 1966 then moved north to Long Beach, where they raised three children. In the late 1980’s, Sharon moved to Hemet where she worked for Ember’s Restaurant until it closed its doors, and worked for Mr. T’s restaurant until she retired in 2008. She briefly lived in Las Vegas, Nevada and Irvine, California, but spent most of her time in Hemet, California. Sharon had an intense love for her children, cherishing her grandchildren, and was the center of the entire family. No matter what situation would come up, she always made one feel like they could do anything they put their mind to. She loved going to Angels baseball games, spending time with her grandchildren, coloring in her art books, and cooking for her family. She loved her dog, Harlow, immensely, and always traveled with her in tow. She couldn’t wait to have her first cup of coffee every morning, while awaiting her morning calls from her daughters. The holiday season was her favorite, and as we near Thanksgiving, we will remember her beautiful smile, her laugh, her big, warm hugs, her bags full of candy and treats, and her wonderful conversations. She was truly the heart of the Gillen family. Sharon passed on in the early morning hours of Friday, November 4, 2016. She is survived by 3 children: Lynette Gillen, Tina Gillen, and Daniel Gillen; 5 grandchildren: Cassandra and Matthew Stevens, Cynthia Plaxton, and Elise and Sienna Gillen; 5 great-grandchildren: Mariah and Jordan Walden, Liem and Nash Plaxton, and Matthew Stevens; and 2 sisters, Orlene Lee Pipitt and Jackie Mosely, as well as numerous nieces and nephews. She is preceded in death by her parents, Bertina and Orlin Spencer, her husband, Albert Austin Gillen Jr.; her sisters Carnene Jean Skinner, Karen Kay South, and brothers Paul Eugene Spencer, and Vernon Lee (Duke) Nichols.

Sharon Francine Gillen was born on May 11, 1949 in Richmond, California to Bertina Paulson of Chadron, Nebraska and Orlin Spencer of Marshall, South Dakota. She spent her early years in San Pablo, where her mother and grandmother, Nellie Viola,... View Obituary & Service Information

The family of Sharon Francine Gillen created this Life Tributes page to make it easy to share your memories.

Send flowers to the Gillen family.