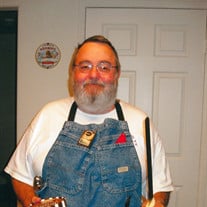 Sherwood George Adams, 65 of Hemet, California passed away on Tuesday, December 10, 2013, at Hemet Valley Medical Center in Hemet, California. Born in Tulare, California on Tuesday, October 5, 1948, he was the son of George Adams and the late Lucille Murphy Adams. He was the beloved husband of Linda Jean Adams for 41 years. Surviving are sons, Ryan (wife, McKenzey) Adams and Scott (fiancée, Jessica) Adams, daughters, Sarah (husband, Tony) Cox and Erin Adams, sisters, Darcy (husband, Tobia) Colontuono and Lisa (husband, Larry) De Luna, and 9 grandchildren. "Woody" as many people called him worked as a senior service planner in the water department in Palm Springs for 37 years. He was known for being outgoing, strong willed, and having a grand heart. He enjoyed collecting antiques, making custom knives, and above all more than a hobby, his passion was collecting trains. he was also a Dodger fan. Woody will be greatly missed.

The family of Sherwood George Adams created this Life Tributes page to make it easy to share your memories.

Sherwood George Adams, 65 of Hemet, California passed away on...

Send flowers to the Adams family.