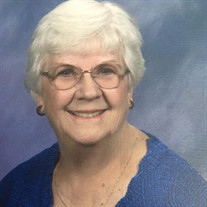 Shirley Mae Dusek Rodie, 94, passed away on April 27, 2022 at the Brookdale Assisted Living facility in Rancho Mirage, CA. Shirley was a devoted spouse, a loving mother and a beautiful soul. Shirley was born on January 6, 1928, in Chicago, Illinois, to Frank and Mary Dusek. She was the youngest of five children. Shirley lived in Chicago and graduated from Bowen High School in 1946. She worked as a secretary for Western Union where she met Walter Rodie, Jr. They were married on October 14, 1950. The family moved northwest of Chicago to Hoffman Estates in 1965, then to Northridge, CA, in 1974. While residing in Northridge, Shirley trained and worked as a librarian at the neighborhood middle school. Shirley and Walter relocated to Hemet, CA, in 1984. Shirley spent the next 36 years as a member of Trinity Lutheran Church and, later, as a founding member of the Spirit of Joy Lutheran Church. She was a valued employee and volunteer worker at both churches. She is survived by her three sons, Walter Rodie III (Monika) of Morgan, UT, Warren Rodie (Amy) of Strasburg, CO, and Scott Rodie (Theresa) of Honolulu, HI; and her 10 grandchildren and 16 great grandchildren. Shirley was preceded by her parents, Frank and Mary Dusek, her husband Walter, her two brothers Robert and Donald Dusek, and her two sisters, Marian Hoffman and Betty Armstrong.. A memorial service will be held on Thursday, May 19, at the McWane Family Funeral Home in Hemet at 10am. A short burial service will be held the same day at Riverside National Cemetery commencing at 1:45pm. The Rodie family would like to thank the staff at the Brookdale Mirage Inn and Family Hospice Care of Palm Springs, CA, for their compassionate and personal care for our beloved mother. Additional thanks are extended to the staff at McWane Family Funeral Home for the compassion and guidance with the handling of arrangements.

Shirley Mae Dusek Rodie, 94, passed away on April 27, 2022 at the Brookdale Assisted Living facility in Rancho Mirage, CA. Shirley was a devoted spouse, a loving mother and a beautiful soul. Shirley was born on January 6, 1928, in Chicago, Illinois,... View Obituary & Service Information

The family of Shirley Mae Dusek Rodie created this Life Tributes page to make it easy to share your memories.