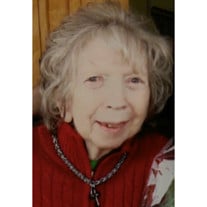 Sylvia Lou (Leak) Driskell, age 77, passed away with her family by her side on January 2, 2016 in Hemet, California. Sylvia was preceded in death by her parents Lester Linnie Leak and Mary Edith (Wright) Leak of Illinois and her siblings Margaret Luethje (Leak), Lois Lucille (Leak)Yoder, and Charles Robert Leak. She is survived by 2 sons, Garrick Alan Driskell Jr. of Menifee, California and his wife Julie, Michael Shawn Driskell of Wildomar, California and his wife Julie and 5 grandchildren, Dillan, Victoria, Jake, Joshua and Justin. Sylvia was born on March 18, 1938, in Winnebago, Illinois. After high school, Sylvia worked as a supervisor for Bell Phone Company in Peoria, Illinois. After getting married to Garrick Alan Driskell Sr, they moved to Southern California where they raised their sons and ran a daycare center out of their home. She later worked for several day care centers and eventually retired from KinderCare taking where she took care of babies in the infant room. She impacted the lives of many families for many years. Towards the end of her life, Sylvia suffered with severe rheumatoid arthritis. She was also diagnosed with breast cancer but was treated and recovered without any complications. She was cared for by her family and later many wonderful health care givers. Although she was in constant pain, Sylvia always put others first and treated everyone she met like they were a friend. Everyone that had the pleasure of meeting her was greeted with her bright and beautiful smile. She will long be remembered as a positive and caring mother and grandmother who put others happiness ahead of her own. Her family would like to thank the Sub-Acute and Intensive Care nurses and staff at Hemet Valley Medical Center as well as Meadowbrook Healthcare Center of Hemet, who cared for her and treated her like Family. Arrangements have been handled by McWane Funeral Home. Services will be held privately at a later date. In lieu of flowers, the family would be honored for donations to be made, in Sylvia’s name, to the American Arthritis Foundation.

Sylvia Lou (Leak) Driskell, age 77, passed away with her family by her side on January 2, 2016 in Hemet, California. Sylvia was preceded in death by her parents Lester Linnie Leak and Mary Edith (Wright) Leak of Illinois and her siblings Margaret... View Obituary & Service Information

The family of Sylvia Lou Driskell created this Life Tributes page to make it easy to share your memories.

Sylvia Lou (Leak) Driskell, age 77, passed away with her family...

Send flowers to the Driskell family.