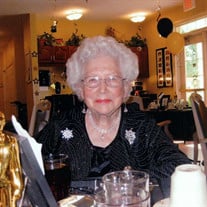 Thelma Josephine (Thatcher) Lord March 5, 1913 – August 31, 2012 Thelma, born in Los Angeles, was raised in Corona and graduated from Riverside Junior College. While in Corona she worked as a secretary at Lemon Exchange Buy Products. In 1935 she married the love of her life, George Lord, and moved to Long Beach, where seven years later, their son Eddie was born. They moved from Long Beach to Montebello in 1946 right after their daughter, Ginny, was born. Thelma worked at the Prescription Shop, followed by twenty years in the purchasing department at Montebello Unified School District. Upon retirement in 1976, they moved to Hemet and had many happy years living in Sierra Dawn. They were members of both the Roamers and Homers Clubs. Thelma also volunteered her time as part of the Hemet Hospital Auxiliary. Her life centered around her family and friends. Along with enjoying evenings square dancing with George, Thelma loved to sew, work on crafts, take walks and read books and inspirational quotes/poems. Thelma and George celebrated their 67th wedding anniversary in September of 2002. In November of that year they moved to Sunwest Village. At the age of 97, Thelma moved to Emeritus Senior Living. Thelma lived all of her 99.5 years with a positive attitude; her smile and generosity will be missed by all who had the pleasure of knowing her. Thelma’s children are grateful for the love she received from Hospice as well as her friends and caregivers at Emeritus Senior Living. Thelma was preceded in death by her husband, George C. Lord, along with two brothers: Charles Thatcher and Kenny Plymate, two sisters: Helen Lisle and Evelyn Cane and a great-grandson, Gregory Lord. She is survived by her two children: Ed Lord (Karen) of Mohave Valley, AZ, and Ginny VanBenthuysen (Thom) of San Diego, 4 grandchildren: Greg Lord (Kim), Mya Rodriguez (Anthony), Cory Hoffman (Reuben), and Mandy Beckham (Dave), 5 great-grandchildren: Kaya, Curren, Ozzie, Lexi, and Philip– along with 4 nieces and 1 nephew: Sally, Karen, Marcia, Cathy and Bill. Entrusted to the care of McWane Family Funeral home.

The family of Thelma Josephine Lord created this Life Tributes page to make it easy to share your memories.

Send flowers to the Lord family.