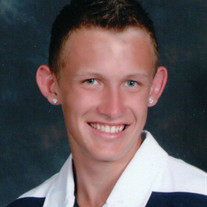 Vance Emter was born Sept. 2, 1994 in Hemet, Ca. He has been active his whole life. Activities Vance enjoyed include T-Ball, Karate; he raced dirt bikes for 4 years and won many trophies. Vance also was involved in the grange, played baseball and football. When he was young his favorite song that he loved to hear over and over was the Barbie song by Aqua and the Banana song by Gwen Steffany. Vance was a love-able child, when he was in elementary school he would always hug his principle Mr. Wilson. All the teachers fell in love with him. He was always trying to help everyone. At the age of 5 he wanted to dirt bike. He would do work to save his money and by age 6 he had his first dirt bike a PW50. He wanted to start racing and reached that goal as well. He raced at Perris raceway on Sunday's, but his first race was at Lake Elsinore Grand Pre. Vance's next adventure was the grange where he raised animals to sell at the fair. He did this for 2 years Vance played baseball for 1 season and then transitioned from baseball to football once he started Middle School. Middle School football was a big thing for Vance so he started playing for Valley View flag football during the eighth grade football season. His freshman year of High School Vance began playing football for Hemet High School. He just ran with it! Vance touched so many lives throughout his time here with us, he was loving, caring and a very passionate guy. Vance graduated in the class of 2013 from Hemet High School. After graduation, Vance decided he wanted to be a football coach. Vance went to the head coach at Hemet High and spoke to him about his goal of becoming a football coach. Coach Rietz gave him a position as an assistant coach for the freshman. On Monday August 5th, 2013 he was able to fulfill his dream. He coached the Hemet High School football freshman team. He was taken from us on August 6th, 2013. Vance was a goal setter throughout his life and achieved all of his dreams. I know that if Vance was still with us today he would be ever reaching higher and higher and achieving whatever goal he set for himself. In addition to touching many more lives. Vance will always be missed and loved by all, and those that had the opportunity to meet him have been blessed greatly. Entrusted to the care of McWane Family Funeral Home.

Vance Emter was born Sept. 2, 1994 in Hemet, Ca. He has been active his whole life. Activities Vance enjoyed include T-Ball, Karate; he raced dirt bikes for 4 years and won many trophies. Vance also was involved in the grange, played baseball... View Obituary & Service Information

The family of Vance Anthony Emter created this Life Tributes page to make it easy to share your memories.

Send flowers to the Emter family.