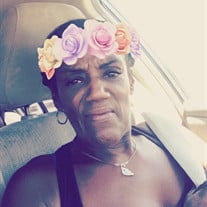 Vivian Jean Thomas was born in Los Angeles, California on August 6th, 1960 to her proud parents, Perry and Susie Thomas. Vivian attended, and graduated from 111th Street Elementary, Markham Middle School, and David Starr Jordan High School, all in the Watts section of South Central Los Angeles. Vivian accepted the Lord early in her life, and was baptized at Mount Calvary Baptist Church in Watts. As a teenager Vivian was very active, participating in extracurricular activities, like swimming, gymnastics, track and field, and girls softball, all of which she excelled in. During this time, she met and fell in love with Marcellus Kemp. From this relationship, her only child, Aliva Kemp was born. Vivian spent her early adulthood working as a nursing assistant, raising her daughter, Aliva, and being of service to others. Vivian was no stranger to people she met, and found friendship wherever she went. Vivian lived by a simple philosophy; "Treat others as you would want to be treated." In Vivian's fifty-seven years of life, there was no challenge she did not meet; no obstacle she did not overcome; and no opportunity she missed to be one of the most genuine, down to earth people you could ever meet. Her parents, Perry and Susie Hartsfield, her sister, Katrina, and brother, Ronald preceded Vivian in death. Vivian is survived by her loving daughter, Aliva; son-in-law, Stanley; granddaughters, Alexandria and Audaneysha; great grandson, Anthony; Stepmother, Gracie; aunts, Barbara and Loretta; sisters, Teresa and Jacqueline; brothers, Gerald, Perry Jr., Richard, Gregory and Charles; and a host of nieces, nephews, great nieces and great nephews. Vivian was dearly loved, and will be deeply missed by her family and all who knew her.

The family of Vivian Jean Thomas created this Life Tributes page to make it easy to share your memories.

Send flowers to the Thomas family.