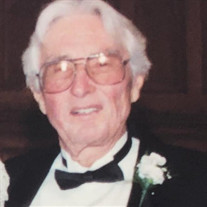 Wade Andrew Steinruck, 99, passed away with his family at his side on August 2, 2019, in Hemet, California. Wade was born on February 2, 1920, in Pomona, California, to his late father Bernard Geiger Steinruck and late mother Elsie Pearl (Tucker) Steinruck. He grew up on 10 acres in Scottsdale, Arizona, then moved to California after graduating high school. In 1944, at the age of 24 years old, Wade joined the Navy and served during World War II as part of a utility squadron that towed targets for planes to aim at. Five years later he married the love of his life Willa Elizabeth Lauder whom he spent 70 amazing years with. It was her patience that allowed Wade to build his dream sailplane which took 9 years to manufacture in his spare time. With his mechanical talents, he designed and manufactured this all aluminum sailplane, the Steinruck SCS-1, which he built in his home from 1950 to 1959. It was on display at the San Diego Air and Space Museum, and was the first of its type to land at Lindbergh field now known as San Diego International Airport. Wade was also a hardworking man. He worked as a Flight Instructor, a Quality Control Engineer for Ryan Aeronautical for 20 years, then worked for the Operating Engineers until retirement. At retirement, he used his craftsman abilities to build his dream home: a home with a hanger larger than the home, and adjacent to an airport. For recreation, he always wanted to fly. For sixty years he enjoyed aviation and being a pilot. On weekends, he flew a jumper plane for parachuters at Skydive Elsinore in Lake Elsinore. He and Willa flew in their Luscombe then later their Cessna for years. Wade always said, “I could fly the crates that they (airplanes) came in” and was confident he could fly anything. He also built his own hang-glider, ultra-light (the Peachy Keen), and maintained a collection of VW Bugs. Wade is survived by his wife Willa, his daughter Willa Belle (David) Dammann, and his four wonderful grandchildren; Nicholas, Zachary, Maxwell, and Mitchell. He was preceded in death by his son Douglas Steinruck, and his two brothers Lyle and Ned Steinruck. Wade was an amazing man who will be missed by many.

Wade Andrew Steinruck, 99, passed away with his family at his side on August 2, 2019, in Hemet, California. Wade was born on February 2, 1920, in Pomona, California, to his late father Bernard Geiger Steinruck and late mother Elsie Pearl (Tucker)... View Obituary & Service Information

The family of Wade A. Steinruck created this Life Tributes page to make it easy to share your memories.

Wade Andrew Steinruck, 99, passed away with his family at his...

Send flowers to the Steinruck family.