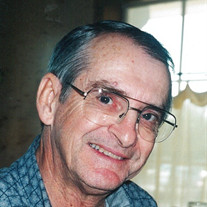 Walter “Walt” S. Guttke entered eternal life at 5:09 p.m. on September 10, 2015. He was 80 years old. Walt was preceded in death by his father and mother, Kingsley and Thelma Guttke, his younger brother George Guttke, and son-in-law Richard Harris. Walt is survived by his wife, Karen Guttke, two daughters, Linda and her husband Yves Cote, Pam Harris, three grandchildren, Christian and Ashton Cote and Brian Harris, one niece Marcia and her husband Lamar Woods their daughter and granddaughter. He entered this world on January 23, 1935 in Berwyn, Illinois. In 1940, Walt’s parents moved the family to Pensacola, Florida where he started school. After one year the family moved back to Illinois where he finished high school in Mt. Carmel, Illinois. During eleventh and twelfth grade he worked for the Mt. Carmel Newspaper and also joined the National Guard in 1953 until 1955. In 1956, Walt joined the Army and after training served two plus years deployed in Germany in the ASA (Army Security Agency) which was soldiers trained in military intelligence. The ASA was tasked with monitoring and interpreting military communications of the Soviet Union and their allies. This deployment enabled Walt to travel to several different European countries which he enjoyed very much. After leaving the Army in 1959, Walt worked at several different jobs around his home town before moving to California in 1961. Walt lived with his Aunt in La Puente, California and was working as a Surveyor when he met Karen and they married in 1964. They were married 51 years. Shortly after marriage, they moved back to Florida where they lived until 2010 at which time they moved back to California so Karen could be close to her family. While in Florida, Walt worked as a bakery delivery employee and then for the U.S. Postal Service where he spent the next 31years retiring January 1995. Walt had several favorite past times which included bowling, gardening, fishing, and photography. Along with Karen they spent many years bowling with friends on several different teams and leagues. His gardens always had a large variety of vegetables that provided some of the best fresh vegetables anyone would want. Fishing was another favorite hobby of Walt’s. He spent many hours fishing with his brother George, other family members and friends. If no one was available he would hitch up his boat and down to the Escambia River he would go and bring home enough for a good fish fry for that night and plenty for the refrigerator. Walt loved to barbeque and many of his fish ended up on the grill or in his smoker along with many other combinations of meat. His photography and especially his black and white stills were worthy of museum placement and many were framed. Walt spent his last months in Assisted Living while Alzheimer’s took away his ability to live the life he enjoyed and still wanted. He will be missed by all that knew and loved him. Rest in peace, Walt.

The family of Walter S. Guttke created this Life Tributes page to make it easy to share your memories.

Send flowers to the Guttke family.