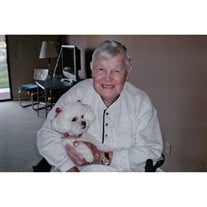 WESLEY “TIERCE” LONG MARCH 11, 1922 – OCTOBER 16, 2012 Tierce is survived by the love of his life, Eileen, his wife of 68 years, three children Teresa, Stephen and Susan and their spouses, six grandchildren and five great grandchildren. Tierce was born in Yuma, Arizona, growing up as a charming, intelligent, athletic farm-boy, whose excellence in math and science lead him to academic achievement and Military Honors. A graduate of Arizona Teachers College, he was commissioned a 2nd Lieutenant in the United States Army during WWII. He met Eileen in Seattle, Washington while in transit to Alaska and after a whirlwind courtship carried on by mail, they were wed on his return to the States. Remaining in the service following the war, Tierce was selected to attend the Naval Post Graduate School in Monterey California where he received a Masters in Nuclear Physics, becoming a foremost Army specialist in United States Strategic Defense. With his young family, Tierce spent many years attached to the North American Defense Command in Colorado Springs, Colorado, relocating to Anaheim, California in 1960 where he began a second career in the Aerospace Industry as a highly sought after consultant. Remaining in the Army Reserve he rose to the rank of Lt. Colonel, returning to Colorado Springs with Eileen in 1967, where they made their home until his retirement from Kaman Sciences in 1985. Eileen and Tierce then embarked upon a 23 year long adventure, traveling the United States in their motor-home, returning to Hemet, California every winter, where Tierce had first visited in the early 1930’s with his father, bringing crops from Yuma to the local market. Known by all as one of the kindest, gentlest, and most intelligent spirits to grace our lives on earth, Tierce will be waiting to greet us all, as the miracle of life continues to the other side. Entrusted to the care of McWane Family Funeral Home.

The family of Wesley Tierce Long created this Life Tributes page to make it easy to share your memories.

Send flowers to the Long family.