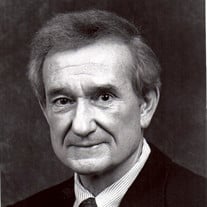 There’s a certain historic symmetry that we mark the thirtieth anniversary of President Ronald Reagan’s historic unveiling of his Strategic Defense Initiative (SDI) within days of the passing of a man who played a central role in inspiring it. We must take the occasion of celebrating the former to honor the latter: Dr. William Van Cleave, an unsung hero of the War for the Free World, and most especially the part of that long and continuing conflict known as the Cold War. How fitting as well that the same day Dr. Van Cleave died in his Southern California home, the Obama administration was forced publicly to reverse course on its systematic efforts to diminish the direct manifestation of Mr. Reagan’s SDI program. Secretary of Defense Chuck Hagel announced on March 15th that the modest array of U.S. missile defenses now in place would be enhanced in the face of a growing threat from the increasingly truculent regime in North Korea. Bill Van Cleave would consider that to be the very least we can do given Pyongyang’s declaration that it is prepared to launch a nuclear attack against us. More to the point, as one of the Nation’s most longstanding and steadfast supporters of anti-missile systems and the imperative for their deployment in the most comprehensive, effective and efficient manner possible, Dr. Van Cleave would probably have sharply criticized the modest nature of Team Obama’s new initiative. He was the sole critic allowed to testify against the 1972 Anti-Ballistic Missile Treaty, and he would have recognized in the administration’s abiding determination to limit the size and capability of our defenses in deference to Russian opposition a throwback to that happily now-abrogated accord. The man who was one of Ronald Reagan’s top advisors on national security matters during his successful 1980 campaign for the White House and chaired the President-elect’s Defense Department transition team would likely have faulted the incumbent president for the several obvious inadequacies of the new anti-missile plans. The fourteen additional West Coast interceptor missiles will not come on line until 2017 – possibly years after the North Koreans achieve real intercontinental ballistic missile capabilities. It will probably take even longer to put some on the East Coast. And the administration’s own blueprint for defending us from Europe, announced after Mr. Obama dismantled one laid on by his predecessor, has been scotched – doubtless, as before to the Kremlin’s delight. Speaking of the Kremlin, few understood better than William Van Cleave its unchanging character and ambitions. He played an indispensable role in defeating the USSR during the Cold War with his service on what came to be known as “Team B.” In 1976, this group of outside experts known for their clear-eyed warnings about the Soviet threat were invited by then-CIA Director George H.W. Bush to provide a second opinion on the advisability of the official (Team A) policy of appeasement known as “détente.” Ronald Reagan fully agreed with Team B’s findings that this policy was dangerous and used them as his platform in the primaries that year against Gerald Ford and Henry Kissinger, and then in the general election four years later against Jimmy Carter. More importantly, he employed the Van Cleavian Team B analysis as the foundation for the strategy for destroying the Soviet Union he adopted during his first term as president. Over the years, Bill Van Cleave contributed mightily to the common defense through his service on various other public and private sector commissions and groups, as well. Notably, he was a member of: the American delegation to the U.S.-Soviet Strategic Arms Limitation Talks; the Arms Control and Disarmament Agency’s General Advisory Committee; the storied Committee on the Present Danger; the Independent Working Group on Missile Defense; and the advisory board of the Center for Security Policy. Not least, he was also formerly an officer in the Marine Corps. Dr. Van Cleave’s most enduring legacy, however, is the cohort of extraordinary national security professionals he recruited, inspired and trained over his decades as a professor of defense and security studies, for many years at the University of Southern California and subsequently at Missouri State University. Among the best known of the alumni of his extraordinary pedagogy are former Deputy National Security Advisor J.D. Crouch, incumbent Air Force Secretary Michael Donley, former Assistant Secretary of State Paula DeSutter, former Deputy Assistant Secretary of Defense Keith Payne (who now runs the Van Cleave progam in Washington), former National Counter-Intelligence Executive (and Dr. Van Cleave’s ex-wife) Michele Van Cleave and former National Space Council Executive Director Brian Dailey. Few of those whose lives were touched – and inevitably shaped – by Bill Van Cleave will forget his unflagging patriotism, formidable intellect and extraordinary grasp of history. And none will forget his ability to evoke in others a shared passion for the philosophy that his patriotism, intellect and understanding of history commanded, which his friend, Ronald Reagan, dubbed “peace through strength.” These qualities, and Bill’s wry humor and stalwart friendship, will be sorely missed as the nation he loved once again experiments with the doomed and reckless alternative: hoping for peace despite weakness. Entrusted to the care of McWane Family Funeral Home.

There&#8217;s a certain historic symmetry that we mark the thirtieth anniversary of President Ronald Reagan&#8217;s historic unveiling of his Strategic Defense Initiative (SDI) within days of the passing of a man who played a central role in... View Obituary & Service Information

The family of William Robert VanCleave created this Life Tributes page to make it easy to share your memories.

There’s a certain historic symmetry that we mark the thirtieth...

Send flowers to the VanCleave family.